Schoolly D doesn’t give a fuck.

IMO the most punk hip-hopper that ever gripped a mike (as in the attitude/DIY way), Schoolly D  is at his best when the music he creates comes closest to falling apart. In what he says, how he says it and the way in which he creates his tunes, he reflects the punk ethos of doing whatever it takes to get his songs heard, get his name out and the way in which this occurs is less important the fact that it is done.

As most hip-hop heads would know, there was a synergy between punk and hip hop in the late 70s and early 1980s. John Lydon and Afrika Bambatta dropped ‘World Destruction’, the Clash had Grandmaster Flash support their 1980 tour, Malcolm McLaren had a hit with ‘Buffalo Gals’, punk rockers The Beastie Boys hung out at Danceteria before reverse white-facing their way towards ‘Licensed To Ill’ and even the doyen of the downtown scene Fab 5 Freddy stated that “There has always been this rebellious connection between hip-hop and punk music”.

Schoolly D’s not giving a fuck attitude carries over to his choice of backing tracks. In collaboration with DJ Code Money, he sampled whatever he felt like with scant regard given to licensing requirements and legal wherewithal’s. Admittedly this was easier in the halcyon sampling era of the late 1980s, but it still takes a certain amount of balls, to sample the main riff from Jimi Hendrix’s ‘Voodoo Child (Slight Return) and transform it into a track called ‘Pussy Ain’t Nothing’ as he did on his 1988 album Smoke Some Kill.

Similarly, the blistering title track of his ‘Am I Black Enough For You’ from 1989 takes a significant chunk of Billy Paul’s tune of the same name and ‘Soul Power 74’, ‘Mama Feelgood’ samples ‘Mama Feelgood’ and ‘Think (About It)’ by  James Brown squeeze Lyn Collins and ‘Where’d You Get That Funk From’ obtains its own from large chunks of Zapp and George Clinton. It is probably for this reason, original Schoolly D albums have traditionally been quite hard to find and even now few are available except on the second hand market at high prices. His track ‘Signifying Rapper’ which was originally on Smoke Some Kill features an interpolation of Rudy Ray Moore and ‘Kashmir’ by Led Zeppelin. It was subsequently used as the end credit music on Abel Ferrera’s Bad Lieutenant and the notoriety of the film eventually led to Schoolly getting sued and having to pay out big bucks to Led Zeppelin’s record label and lawyers.

Most likely to address this very issue, A Gangsters Story was released in 1996 which is essentially a best of album with all new backing tracks. Some of which are quite good, particularly ‘Saturday Night’ which is as good or better than the original. However, the polished versions on this album lack the visceral thrill of the original cuts which always seemed so much rougher and more appropriately encapsulate the street thug vibe that Schoolly projects. 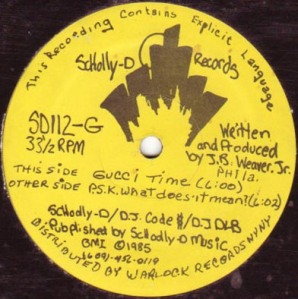 From his first release of PSK in 1985 in which he rapped about a local street gang called the Park Side Killers, Schoolly has been derided and lauded in equal measure. He’s universally regarded as having created gangster rap, but critically mauled for his one note performances and skills. In my opinion, he is a true iconoclast forging new paths for others to later polish and profit from, but unlike those who tread in his wake, he has never compromised and his music and his audience are much richer for that.

Schoolly stalkin’ the stage at the fabled Latin Quarter circa 1986

“Muthafuck it, I get straight to the point
You don’t dig what I’m sayin, then fuck you
Cause sellin drugs only job that a nigga got
Sellin caine to the kids in the parkin lot”

Written and posted by Horatio Cornblower. Copyright 2013. All rights reserved.

[Skip to  1:31  if you wish to avoid the Richard Pryor scratch intro].

MAMA FEELGOOD (Essentially an entire track about getting hard-ons/laid)

MR BIG DICK (Speaks for itself, I guess. Gotta love the twist on Aardman/Peter Gabriel claymation)

RUN (I am sucker for a Warriors sample)

SCHOOL’S OUT (with Mekon)