Whilst wandering around the men’s department of Shinjuku Isetan, I came across a Stone Island counter. This would have been surprising if I had not already encountered one in the Mitsukoshi Department Store in Ginza a few days earlier, and now having the time I decided to peruse some items.

As Californian rapper Rasco once said, ‘Time waits for no man’, and indeed in my advancing years I find myself drawn to items I would never have considered in my early twenties. Noticeably knitwear, which although once considered only the province of my grandpa, I now know to be considerably cooler by virtue of the fact that Steve McQueen preferred to get around in shawl necks in his prime 1960s years. 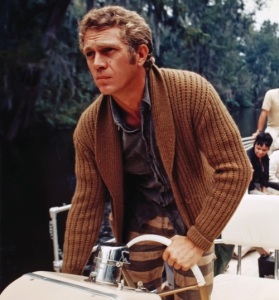 So, looking for a new item that bore no resemblance to anything else I owned, I chanced upon a funnel neck cardigan that I believe is rather generically named ‘KT721’.

They come in a variety of colours, and without doubt white is – by far – the best looking one. I bought grey nonetheless, as having previously owned white clothes before, I know better than to ever, ever buy some again.  Unless of course, I wind up joining a cult… however presumably at that point, I am unlikely to be making my own choices regarding anything. 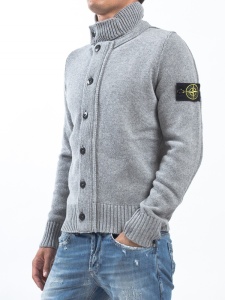 It has a traditional button up front with a sneaky zip underneath, a very warm neck that can button up on itself and the standard Stone Island compass patch on the left arm. 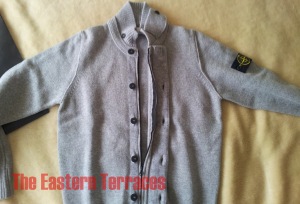 Zip and Buttons. Photos by author.

Inside the garment, you get a few spares buttons as well.

The inside tag features some kind of clothing equivalent of microdot technology that enables the owner to identify whether it is legit or not and where it came from. Called Certilogo, interested customers can use the 12 digit code from the label  to check the authenticity of the item. Having bought this from a Japanese department store though I don’t feel the need, but appreciate the idea having seen how many fakes there are online.

Whilst hardly a bargain at close to $600 (AUD), this is nonetheless a comfortable, warm and in my opinion stylish piece of old man’s clothing.

Written and posted by Horatio Cornblower. Copyright 2015. All rights reserved.

[FYI, The Stone Island counter was located in what could only be described as the casuals section of the men’s department. Immediately adjacent were Montcler, Lacoste, Victorinox and Burberry/Aquascutum].